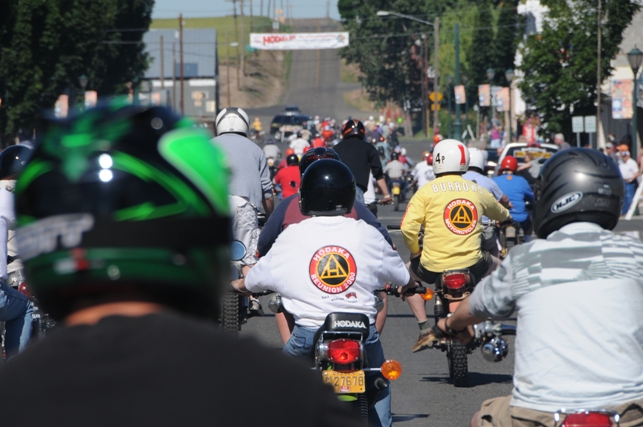 Each year during the last full weekend in June, the Hodaka Club holds Hodaka Days in Athena, Oregon.


This years event is June 25-28. If you plan on camping, plan on getting there on Thursday or even earlier.

It's the annual gathering of Hodaka Club Members as well as other fans of Hodakas and vintage motorcycles!! The city of Athena opens up its park for several Hodaka Days events, and most years, for inexpensive swimming. The Athena City Park swimming pool and showers are usually open for Hodaka Days, which is always held the last weekend in June.

To start things off, there's a vintage bike Poker Run "TT ride" on Thursday several miles out on paved back roads. During the Badrock ride on Friday, back in town at the Athena City Park there's the Hodaka parts Swap Meet with Vendor booths, raffle sales, registration and silent auctions. The Swap Meet starts on Friday as usual (Bring your Hodaka rollers and parts!!) and there's free tent camping in Athena City Park with an all-night security patrol. Just set up your tables and Easy-Ups in your chosen spot in the Athena City Park. There's no fee to sell your Hodaka bikes and parts and any vintage stuff you might have!!

Register for Hodaka Days, get an event schedule and if you join the club you'll get some great SWAG from our sponsors like stickers, key chains, pens, free magazines and other stuff! To sign up for the Badrock ride, there will be an announcement on this website providing a way to sign up for Club Members first, and if there's any spots left, then non-club members can sign up.

Then there's the eye opening Bike Show in Athena City Park, plus an Awards Banquet, Auction and BBQ that evening! 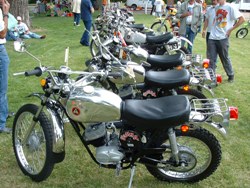 A family-friendly "playday" for twin shock motorcycles up to 250cc takes place at the Diamond-Eye Manufacturing track on Sunday.

There is also a free health check by the Lions Club, Car Show, a VFW pancake breakfast and a breast cancer awareness walk, so really there's something for everyone at Hodaka Days!!

The past couple of years, Peter Starr, famed Hollywood director and producer of the original "Bad Rock" film has attended, bringing along some of his remastered video for a Movie night at the Longbranch Saloon in Weston, a few miles from Athena.

This is really an event that brings back the simple pleasures we all enjoyed when these bikes were originally sold back in the 70's! Just picture a small county fair atmosphere and good fellowship with really good folks, all tied together around a castor oil fueled, expansion chambered Hodaka festival!

More information is available on our Events tab or visit the official Hodaka Days web site: www.hodakadays.org. Please check out our 'Volunteers Needed' page for Hodaka Days, or contact Ervin Robison (e.robison@live.com) if you would like to volunteer to help with any of the events at Hodaka Days!!

Hodaka Name and Logo are Copyright © Strictly Hodaka, LLC and used with permission

The Hodaka Club is chartered by the American Motorcyclist Association (2006) and incorporated in the State of Oregon.